THE PRESENT Historic St. Bernard Parish Courthouse was designed by the architectural firm of Toledano and Wogan in New Orleans in 1914.  Toledano and Wogan designed some of the most important structures in New Orleans including the Grunewald (Roosevelt) Hotel, De Soto (Le Pavillon) Hotel, Monteleone Hotel and Werlein’s Music Store on Canal Street.  The principal partners in the firm descended from prominent families who owned St. Bernard sugar plantations in the 18th and 19th centuries and were related to the Beauregard, Ducros, Olivier and Reggio families.

There have been five courthouses in St. Bernard Civil Parish.  This is the third courthouse on this site.  The property was sold to St. Bernard Parish by Vicente Nunez in 1848 for the sum of $1.00 to establish a parish seat in the center of the populated areas of St. Bernard.  The first courthouse on this site was completed in 1848.  It was raised on brick piers and of wooden stud construction.  It was abandoned after the Civil War and the courthouse was illegally relocated to Stocklanding (Arabi), Louisiana.  After reconstruction, the courthouse briefly returned to St. Bernard Village in 1880 until it burned in 1884.  Once more, the courthouse was temporarily relocated to Stocklanding (Arabi) though legally this time.  Harmon Turner, a resident of St. Bernard Village, received the contract to build the second St. Bernard Parish Courthouse on the site.  It was constructed on elevated brick piers, was of wooden stud construction with a hipped roof.  A wooden cupola surmounted the roof.  Constant concerns were voiced about building a new courthouse which would be larger and more fire resistant.

Toledano and Wogan designed a building which was 80% fire proof.  The walls and floors are all of poured concrete.  The balustrades, balusters (railings and spindles), columns and decorative plaster work are also poured concrete.  The original grand staircase leading to the second and third floors is of cast iron.  White marble stairs set an impressive tone at the front entrance, as do marble base boards on the first floor.  Only the doors, door surrounds, window surrounds, windows and flooring in several rooms are wooden. The colors used throughout the courthouse were recorded in the building specifications which, with the original plans, are housed in the Southeast Architectural Archives in Tulane University.  The frieze on the ceiling in the old courtroom on the second floor is of acanthus leaf design and the decorative molding on the wall where the ceiling cove begins is of egg and dart design.  Acanthus leaves signify strength and stability of rule.  The egg symbolizes birth and life and the dart symbolizes death.  Both decorative motifs were borrowed from Roman symbolism and architectural design.  The courthouse floor plan is taken from the designs of Italian Renaissance architect Andrea Palladio who influenced the work of Thomas Jefferson and the design of the United States Capital in Washington, D.C.  Construction on the building began in 1914 and completed in 1915 by Jefferson Construction Company for the sum of $64,893.  The catastrophic 1915 Hurricane damaged the courthouse and it was repaired after less than three-month occupancy.

St. Bernard School was established in the former courthouse in 1940.  A concrete staircase was added on the eastern – lower bayou side of the building in 1939 connecting the first, second and third floors.  Classrooms were established in the third floor dead space above the judge’s chambers/jury room.   In time, St. Bernard School developed into St. Bernard High School which remained there until 1966.  P. G. T. Beauregard High School for young ladies was established in 1966 and continued in operation until 1988.  The school then became P. G. T. Beauregard Middle School which operated until 2005 and Hurricane Katrina.

After Hurricane Katrina, the building and former  P. G. T. Beauregard Middle School campus were used as Camp Hope, a facility to house volunteers coming to St. Bernard to participate in the rebuilding effort following Katrina.  FEMA funding subsidized the restoration of the Historic St. Bernard Parish Courthouse which began in 2010 and was completed in 2012.  Improvements to the structure included the construction of a three story addition on its rear/north-facing side to house an elevator, fire stairway, mechanical rooms, restrooms on the upper two floors and other improvements.  The Historic St. Bernard Parish Courthouse is one of the finest early 20th century buildings constructed in the Greater New Orleans Region.

PLEASE NOTE WE DO NOT ALLOW OUTSIDE BEVERAGES AT THE HISTORIC COURTHOUSE, VAL REISS OR THE FREDERICK SIGUR CENTER FACILITIES

We do not accept Cash payments. Personal Checks, money order or certified checks are accepted Checks are made payable to St. Bernard Parish Government. 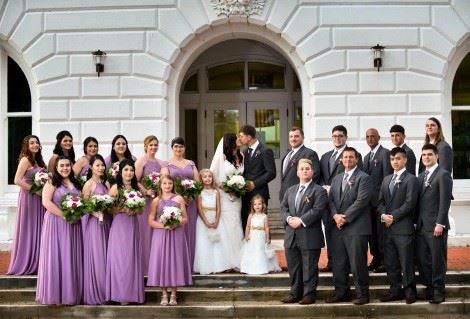